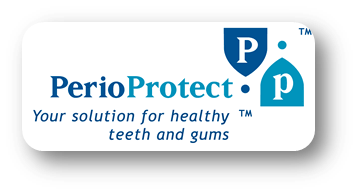 Perio Protect LLC is consulting with one of the world’s leading microbiologists to use scanning electron microscopy (SEM) to complete cellular evaluations to determine the effects of the Perio Protect Method™ on the infection causing subgingival biofilm.

METHOD: Flexible polycarbonate carriers were placed into two 6 mm pockets and one 5mm pocket for 2 days allowing the subgingival biofilm to colonize the carrier. Carriers were inserted before and during treatment using the Perio Tray™ with Perio Gel and Sumycin and subsequently examined by SEM at different time intervals and bacterial counts were completed (Schaudinn and Costerton).

RESULTS: Cell analysis before treatment with the Perio Protect™ system determined the pocket ecosystem consisted of large numbers of fusiform-like bacteria, cocci-like, short rods and in one pocket, treponema-like. After two days using the Perio Tray most of the fusiform bacteria and treponema had disappeared. After 17 days there were less than .02% of the periopathogenic bacteria (99.98: kill) and what remained were some cocci-like and pleomorphic rods that were visible next to large numbers of eukaryotic cells.

CONCLUSION: In this clinical case, the direct application of medication using the Perio Tray radically modifies the microbial ecosystem of periodontal pockets, so that only a few bacteria species and bacteria cells are capable of forming small colonies. SEM cell counts at 17 days determined that greater than 99.98% of the periopathogens were eradicated. The study confirms that the Perio Protect Method is effective in managing the microbial challenge by killing the periopathogens. 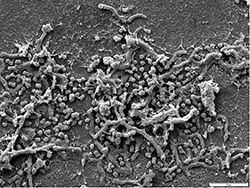 Above are Before treatment (left) and after 17 days of Perio Protect treatment (right), both scales represent 5 μm. Watch the presentation below for more SEM pictures.

Counting the bacteria/unit area demonstrates that 99.98% of the bacteria have been eradicated in 17 days. The few remaining bacteria, cocci- and actinomyces-like, are known as a normal aerobic microflora of healthy gums.

To view a presentation documenting this research study Click Here.

Objective: Pilot study to monitor blood levels of C-reactive protein (CRP) while treating periodontal disease in patients with and without co-morbidities.

Methods: A retrospective analysis of clinical records from January 1-August 1, 2006 from a general dental practice was performed. Records with complete documentation and informed consent were included in the study. The resulting 29 patient sample included 19 females, 6 smokers, 2 patients with diabetes, 8 patients with cardiac disease and an age of 52.9+12.6 years. Three patients exhibited no periodontal disease, 3 had gingivitis, and 23 had periodontitis. All patients with signs of periodontal disease began treatment on day 1 (baseline) with the Perio Protect Method per established guidelines. Blood CRP samples were taken at day 1 and 14 days later through a standard clinical analysis (QuikRead CRP, Orion Diagnostica). All CRP values in the normal range were assigned a “4” for subsequent data analysis. Descriptive statistics were used to describe group differences.

Conclusion: The Perio Protect Method produced a decrease in 14 days in the blood CRP levels in all patient population groups examined.

A new treatment regimen, Perio Protect Method™, is being used to treat all stages of periodontal disease. While clinical response has been positive, this study systematically examines this method that uses prescription trays to direct medications into the gingival sulcus.

Objective: To evaluate outcomes of the Perio Protect Method.

Methods: A retrospective analysis of a small study compared pre-treatment and six months post-treatment records. Sequential subjects with at least one molar in all quadrants and no standard periodontal treatment for 6 months pre-study were chosen to complete 6 months of the Perio Protect program. Disease severity was assessed by probing pocket depth (PPD) and bleeding and established treatment frequency and duration. Teeth exhibiting the worst symptoms of periodontal disease (PPD=5.7±1.8; range= 4-9) and those with the least evidence of disease (PPD=1) were considered in the subsequent analysis. Data was analyzed using paired t-tests.

Conclusions: Treatment outcomes indicate the Perio Protect Method is effective in treating periodontal disease. Further studies are necessary to examine its effect on different patient populations over longer treatment times and to compare it to gold standard treatments.

• “5% to 20% of any population suffers from severe generalized periodontitis, even though moderate disease affects a majority of adults.”
• “If the disease is defined as the identification of at least one site with clinical attachment loss (CAL) of 2 mm or more, around 80% of all adults are affected, and over 90% of those aged 55 to 64.8 “
• “When the case-definition is at least one site with CAL of 4 mm or more, the prevalence in those aged 55 to 64 drops to 64%.”

• This paper was prepared by The Research, Science, and Therapy Committee of The American Academy of Periodontology and is intended for the information of the dental profession.

• Disease can be minimized through effective plaque control.

BOTH DOCUMENT THE FOLLOWING
• A combination of brushing interdental cleaning and chemotherapeutic agents are beneficial in managing periodontal disease.

• In recent publications (Slots and Jorgensen, 2002, Slots and Ting 2002, Walker and Karpinia, 2002) the use of antimicrobials as an adjunct to mechanical therapy has been regarded as beneficial to improve the therapeutic outcome.

No single antibiotic is effective in controlling periodontal disease. Rather a combination with scaling and root planing has proven most effective.

1) scaling and root planing; 2) pocket reduction through osseous surgery and apically-positioned flap; 3) modified Widman flap; and 4) modified Widman flap and topical application of saturated citric acid at pH 1 for 3 minutes.
• Patients rinsed with 0.12% chlorhexidine for the first 3 months postoperatively and received a prophylaxis every 3 months.
• The choice of treatment modality did not affect the prevalence of the target species at 1 year post-treatment. These results suggest that prevalence of microbial pathogens negatively affects the 1 year outcome of periodontal surgical and nonsurgical therapy.

• This article discusses the principles, products, and techniques currently available for local delivery of antimicrobials in the treatment of adult periodontitis. Four principles provide the scientific basis for the treatment of periodontitis: it is caused by bacteria; it cannot be cured, but it can be controlled; clinicians cannot remove all the plaque and calculus; and periodontitis re-infects. This article stresses how the local delivery of antimicrobials can help the clinician achieve the goals of arresting the disease and maintaining the disease in the arrested or controlled state. Rationales for reevaluating the treated patient and treatment options are presented. Local-delivery systems are reviewed, stressing those available in the United States. Pharmacokinetics, multi-center randomized trials, and techniques are presented.

• Hydrogen peroxide has been used in dentistry alone or in combination with salts for over 70 years. Studies in which 3% H2O2 or less were used daily for up to 6 years showed occasional transitory irritant effects only in a small number of subjects with preexisting ulceration, or when high levels of salt solutions were concurrently administered. This (and later) studies have shown that at 3% or less, no cocarcinogenic activity or adverse effects were observed in the hamster cheek pouch following lengthy exposure to H2O2. In patients, prolonged use of hydrogen peroxide decreased plaque and gingivitis indices. However, therapeutic delivery of H2O2 to prevent periodontal disease required mechanical access to subgingival pockets. Furthermore, wound healing following gingival surgery was enhanced due to the antimicrobial effects of topically administered hydrogen peroxide.

• Inflammatory periodontal diseases are related to dental plaque formation. Increase in the perfusion of the inflamed tissue results in increased oxygen supply. Although oxygen has healing effects, it is bound to be a mediator of peroxidation in biological membranes. Chemotherapeutic agents such as chlorhexidine, listerine, sanguinarine, and cetylpridinium chloride and oral antibiotics such as tetracycline HCl and doxycyline were tested for their antioxidative activities. While doxycycline has the highest antioxidant activity in lower volumes (0.1 ml), sanguinarine, listerine and a pace after them, tetracycline HCl, had similar effects in higher volumes (0.3 and 0.4 ml). The results showed that in addition to their antiseptic or antimicrobial effects, these preparations have an antioxidative activity against spontaneous oxidation.

• Matrix metalloproteinases (MMP) are considered to be key initiators of collagen degradation
• Doxycycline (DX) (< or =10 mg kg-1 day-1), is a known MMP inhibitor
• The data show that doxycycline inhibits inflammatory bone resorption in a manner that is independent of its antimicrobial properties.

• Osteoclast formation over 20 days was completely abrogated when tetracycline derivatives doxycycline and minocycline (concentration of 250 ng/ml) were included in cell cultures.
• The exact mechanism of tetracycline action is not known

Perio Protect in the news!
Click here to watch a 5 minute video segment.